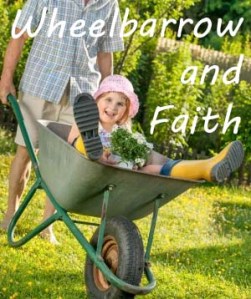 One of my childhood fantasies was being a circus aerialist. I could picture myself flying through the air on a trapeze or walking across the tight wire, carrying a chair. Years later I read about Charles Blondin and relived my fantasy.

In 1880, before an English audience he pushed a wheelbarrow on a 180-foot  rope stretched above the cement floor of Crystal Palace in London. He then asked his awe-struck audience for a volunteer to ride across in the wheelbarrow. There were no takers.

To the spectators’ horror, a very young girl stepped out of the crowd and volunteered. As Blondin began to climb down the ladder, an elderly lady stepped up to her. “Little girl, do you know how high that rope is?”

“What makes you think you can trust this aerialist with your life?”

Just then, Blondin approached the lady, “Oh, I see you’ve met my five-year-old daughter,” he said as he hoisted Adele onto his shoulder and climbed back up the ladder.

He lovingly lifted her off his shoulder, carefully placed her into the wheelbarrow, and pushed her across as the crowd watched in unbelieving silence. The thunderous applause that followed was deafening.

None of my aerialist fantasies ever materialized, but as Adele trusted her earthly father, I want to trust my Heavenly Father to take me through fearful situations that often challenge my faith. So practice with me Jeremiah 17:7:  “Blessed is the man who trusts in the Lord, whose confidence is in him.”

If given the chance, would you have gotten into that wheelbarrow?

One thought on “Wheelbarrow and Faith”